In Australia, we are getting better at engaging everyday people with science.

It is important to engage Australians with science because it plays a significant role in our personal health and wealth, and in our collective growth as a nation.

That is why we'd love to add your science engagement project to the national database.

You can add one project or as many projects as you want.

If you already have a project listed, feel free to update the information at any time.

To make it easy for you to record the details about your project, we have split the form into three sections: project overview, project in-depth, and project evaluation.

You can start filling in your project information today, save it, and come back and continue to complete the information at any time.

There is no rush. However, if you want to tell Australia about your great science engagement work, than of course we’d love to get it published for you as quickly as possible.

Oh, and one last thing, we strongly encourage you to add an image to your project. The World Wide Web is a visual medium, so this will help visitors find your project quicker.

Login if you have an account. Register using form on the right to start adding to Australia’s online database of science engagement activities.

You are about to delete the project.

You are about to move
the project to drafts.

You are about to clear the project.

Incorrect dates of the activity

Start date of the activity can't happen after the end date.

Poo Power! is a pioneering Melbourne project that made an impact after its launch in June 2012 when it received support from The Awesome Foundation, the Federal Governmentâ€™s Inspiring Australia program and Melbourne Water. Tapping into the 1,350 tonnes of dog poo discarded on a daily basis, Poo Power! will light up Australia -Â­ literally and figuratively. The renewable energy produced by the planned biogas generators will be used to provide light for users of urban parks in the peak early morning and evening periods. Also, the project raises public awareness of the science principles of dog waste (including biogeneration from waste, ecological sanitation and water ecosystem protection) through its outreach program, informative social media, educational resources, and at events to engage Australian communities. 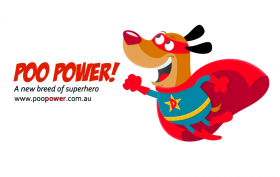 Tell Australia about your great work

Sciencengage is a national database of science engagement activities.

We'd love to add your science engagement project to the database. If you want to tell Australia about your great work, signup, and we'll get it published ASAP.